Life After the Channel

Today marks 2 months since I swam the English Channel so I thought I would write a quick blog on what it has been like since and what I have been up to.

The days after the swim were very surreal and actually still to this day I find it hard to comprehend that I swam for over 17 hours.  It was never something I had planned for or even thought I would have to do but I did and that is the most important thing.  I haven’t swam since as the pain under my shoulder blade still shows from time to time and I also have torn a smaller muscle in my glutes which is still giving me some grief but to he honest it has been nice not to be swimming and taking some down time from it all. It has been nice not getting up early every weekend morning and having time to catch up with friends and family as well as being lazy from time to time. Things I didn’t do much of over the summer.  I will be back swimming soon but for now I am enjoying the rest.

I have been astounded by the amount of money I have raised through swimming the Channel. For the Royal Marsden I have raised, thanks to so many generous people, £8,060 (£9,700 with gift aid) bringing my total for the last three summers of swimming fundraising to over £18,000 for three great charities (Aspire, COSMIC & Royal Marsden). I received a wonderful letter from the Head of Breast unit and another from one of the lead Professor’s in cancer research at the Royal Marsden thanking me for all the money I have raised for them which was so nice to receive and so pleased to know that the money raised will go towards ensuring a brighter future for others.  It has made it all worthwhile.

One of the other things I had wanted to do after swimming the Channel was to inspire others, I truly believe that if you are going to take on big challenges that you should do something with it and for me it is to inspire people to inspire others by doing things slightly out of their comfort zone.  Life is too short for all the negativity in the world so if I can help make some small change then I’d feel pretty happy about that.

Through the power of social media this started soon after my swim when I was contacted by Stylist online to talk through my experience, of course like many things it has been edited with some exaggeration but was some great coverage which helped to raise funds but also inspired a few to do something.  You can read the article here. 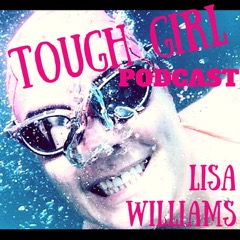 Appearing on the Tough Girl Podcast

Next was when I was contacted by Sarah from Tough Girl Challenges asking if I would mind doing a podcast, the idea being that I would talk about my Channel swim but also about how people could get into swimming.  It was really fun and hopefully I have given people some practical ways to be able to get into open water swimming.  You can listen to it and some really inspiring talks on the Tough girl website I must admit I did find it quite funny being interviewed when the likes of Olympic Marathon runner, Liz Yelling and Gale Bernhardt, the USA Olympic Triathlon & Cycling Coach has been previously been interviewed.  Thank you Sarah for asking me to join a group of inspiring women.

A few weeks after the swim an old school friend had contacted me to see if I would go and do a talk at her company and then one of my companies clients contacted me to see if I would do a talk about my experience at their 15th Anniversary celebrations.  I have really enjoyed doing these and the feedback from people has been amazing.  I really wanted to concentrate on the power of courage, determination & commitment and what you can achieve through these three attributes. I believe these are the key things that helped me to my success.  I really hope that I have been able to make a small difference and it seems from some of the feedback that I have which is great. Lastly I am hoping to support a women’s charity that helps to get women back into work which I am really excited about so watch this space.

After being inspired by a wonderful friend who unfortunately isn’t here to see how she has inspired me I am pleased that I have been able to doing a little bit of inspiring myself and I am enjoying hearing the stories of how I have done so.  The last few months have been some of the most humbling of my life… thank you.

There are a few more interviews which I have done which will be coming out of the coming months but for now I am packing my bag and heading to the sunny shores of Tobago for some well earned rest and some possible warm water swimming and reflecting on a great summer.

Till next time… be inspired and pass it on!