If it wasn’t hard everybody would do it. The Hard… is what makes it great!

Over the last few weeks after doing limited training due to my back injury I pushed my body hard at two long distance training camps. 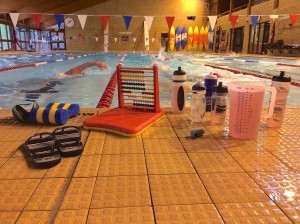 First was Camp Eton organised by Nick & Sakura Adams at Eton College over the Easter weekend. Nick is the President of the Channel Swimming & Pilot Federation and swam, I believe, the Channel 10 times plus many other big swims around the world. It involved two 12-13 hour days over which I swam about 21 km including 100 x 100m.  It had been a long time since I had trained that much and it was great to be able to complete it all despite the back aching a bit. 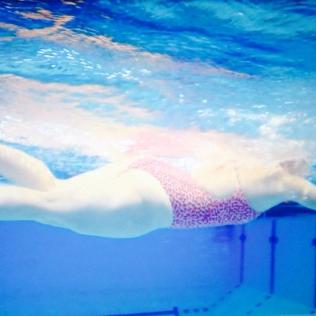 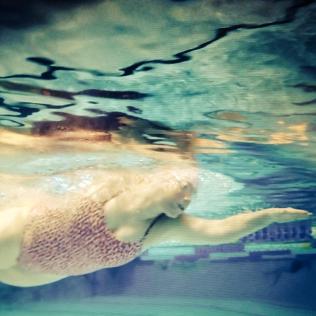 Training
When were weren’t swimming the time was packed with seminars about important aspects of Channel swimming such as feeding, hypothermia, mental preparation, crew & ‘The Four P’s’.

The Four P’s are usually the questions that people want to ask about but perhaps don’t want to so it was a good chance to understand what to do if any of them happen/don’t happen and what you & your crew need to do – they included ‘puking’ ‘peeing’ ‘pooing’ and for us women ‘periods’.  Certainly made me think about things I hadn’t before.

There was also a wealth of experienced swimmers there who had completed many of the worlds iconic marathon swims including Wendy Trehiou who has completed a solo two-way crossing of the English Channel.  It was great to hear their stories and advice on my own swims this summer.  I came away from the weekend feeling like I had a lot more knowledge in my bonnet and more confident about my swimming despite my back which was great news.

Kate & I with swollen faces after 6 hour swim

During the 6 hour (this was my second ever 6 hour swim) I swam with Kate & Olga, it makes such a big difference and made the time go quickly.  Kate & Olga both swam in wetsuits and as I swam between them I kept thinking they were little radiators next to me keeping me warm – it didn’t work but always good to ‘think’ warm!

During the swims we ‘fed’ every 30 minutes – the feed was made up of CNP powder in some warm water with either a jelly baby, piece of chocolate or bit of banana. This was good practice for both my Windermere and Channel swim as this is what I will be feeding on throughout on similar timings. 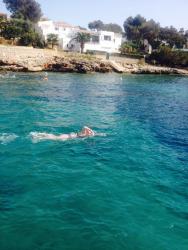 Swimming past the boat 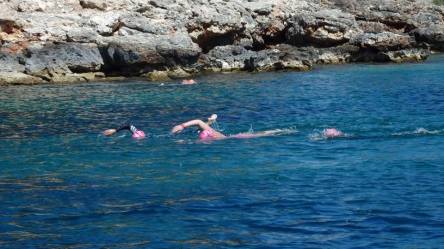 Coming in for a feed

Feeding from the boat every 30 minutes

Throughout the training camp we had some sessions on channel swimming including one by Cliff Golding.  Cliff had many attempts of swimming the Channel before he finally succeeded and the perfect person to tell the story as to how to break down those ‘demons’ and psychological barriers that you come face to face with during a challenge such as the English Channel.

For the first time since I decided to sign up for the Channel whilst I was in Mallorca I started having doubt in my ability to succeed in swimming the Channel.  I am not sure if I was overwhelmed by all the information I had received over the last few weeks about the Channel and the realisation that it isn’t two years away but less than 5 months or something else but I did doubt myself and had a few tears.  However, since I have been back I have spoken to some friends who have swam the Channel and am back on track to believing in myself.  I am sure that it will happen again and probably during my swim as well – I just need to learn how to deal with it and what to do with those thoughts when they come into my head. 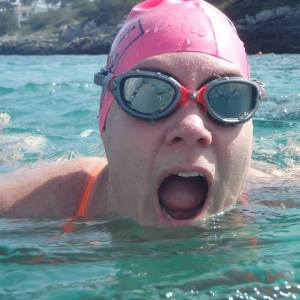 Scary things in the water in Mallorca

I am surrounded by people who do amazing things some of which have swam the Channel and being around them quite often normalised the swim I am going to undertake but it isn’t normal and it is a little bit crazy but I am enjoying the process and the up’s and down’s that come with it – it is certainly making me a stronger and a better person because of the journey.  Thanks to everyone who has been part of my journey so far and those who will be in the coming months.

2 Responses to If it wasn’t hard everybody would do it. The Hard… is what makes it great!