Back in April Kerry and I flew to Spain to attempt to swim across the Strait of Gibraltar and I have been meaning to write it up since then… however, planning my wedding, being made redundant, going on honeymoon and finding a new job have meant I have been a little busy but I have got to it now!

Kerry and I flew out on Friday 8th April to Malaga airport and had a car booked for the week.  Like the English Channel you are given a week slot and hope that the weather is kind to you at some point of the week so you can get out to attempt the swim.  Our slot was the 9th – 15th April.

Map of Strait of Gibraltar

Some quick facts about the swim.  The swim starts in Tarfia in Spain (not Gibraltar as many assume) and finishes on the coast in Morocco. The distance of the crossing can be between 16.5 & 22km depending on the strong current.  Crossings are usually attempted between April and October and the temperature of the water can range from 14-22 degrees during this period.

We landed in Malaga at about 8.30 and called Rafael who runs the Strait of Gibraltar Swimming Association, it was then he mentioned there was a ‘high possibility’ that we would be swimming in the morning and to call him again when we got to Tarifa.  There we were at 1am having our briefing in his office in Tarifa and told to meet at 10.30am the next morning in the harbour just in case we could go.  Hardly the best of preparations but given what the wind is like in the area – big kite surfing destination – we knew that it may be our only opportunity that week so we had to take it.

After a quick supermarket trip in the morning, prepping all our feeds and a quick journey in the car to the harbour the next thing we know we are being told we are off and to get ready.

We were to be taken around to the lighthouse where we would start by boat and then we would follow a boat whilst we swam and have a RIB next to us which we would feed from.  We didn’t take our own crew with us and had agreed with Rafael that the guys on the RIB would feed us.  We had prepped them that we only wanted to feed every hour and we stuck with the CNP mix that we had both used for our solo Channel swims. 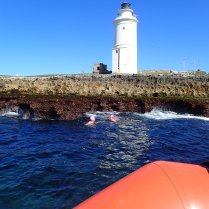 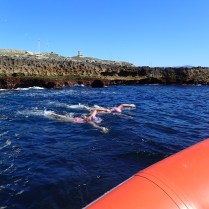 OLYMPUS DIGITAL CAMERA
Unlike the Channel you are able to swim the Strait of Gibraltar as a tandem solo, therefore we would both be recognised as having done the swim solo but swam next to each other.

The day started lovely and sunny and calm, as we jumped in I was reminded that I hadn’t swam in cold water since my Channel swim back in August (8 months prior), the water was 14.5 degrees.  Luckily after 5 minutes or so and with the sun on my back I was okay and didn’t feel the cold through the swim at all.

We hadn’t been sure how long it would take but as we started swimming we could see how strong the current was, which would determine where we would land.  Within about 30 minutes the lighthouse which had been so close was all of a sudden miles away.  Funnily when we had our first feed we both mentioned it, it was that noticeable. 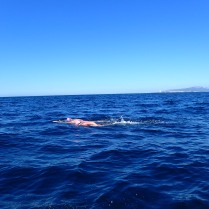 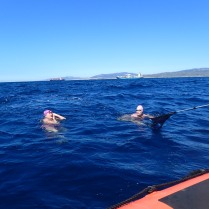 OLYMPUS DIGITAL CAMERA
About halfway into the swim the wind picked up and the swell and waves got so big that for much of the last part of the swim although we were swimming next to each other we didn’t really see much of each other as we were hidden by the waves… however, it was fun surfing them.

As we approached Morocco the boats stopped and we told to swim in to shore and clear the water.  There were a lot of rocks submerged in the water so we weaved in and out of them as came into shore and also avoided the fisherman to the left of us, we didn’t fancy becoming dinner!  However, just as were trying to clear the water we saw two Moroccan’s come running down the mountain in front of us screaming.  And in Kerry’s words “they didn’t seem to be shouting ‘welcome to Morocco'” I had heard the whistle to confirm the finish of our swim and we quickly tried to avoid the rocks to get back out and not get knocked over by the waves – which of course I did.  In the meantime Kerry had managed to pick up two ‘pebbles’ and once we’d cleared we laughed in bewilderment at what had happened!  Who knows what they were shouting but we hadn’t been that keen to wait and find out. 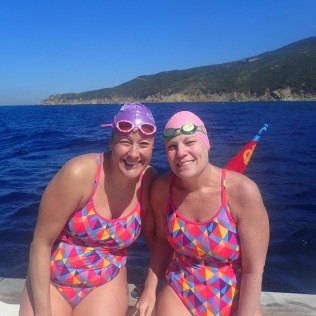 OLYMPUS DIGITAL CAMERA
We climbed back on the boat and were told our time of 4 hours and 14 minutes (we covered 18km in that time) which we later found out was the third fastest British female time and we became the 517th & 518th people and the 105th & 106th women to have swam it (without wetsuits).

It was a pretty uneventful swim, we didn’t see any marine life which is often seen, we didn’t have any injuries, we landed and got back in one piece.  However, it was a really enjoyable swim.  After the drama of my Channel swim it was nice to see a smiley face every time I breathed, have someone to have a quick chat with during feeds and to just enjoy a swim.  It is a great first swim if you are looking for a long distance sea swim that is challenging but is smaller than the likes of the English Channel.

So that was Oceans Seven number 2 ticked off! Who knows if I or Kerry will ever do the others but we can be part of a small group of people who have done two of them!

If you are interested in doing this swim you will need to register with ACNEG , they are a bit slow on the admin side of stuff but were fantastic when we were there and we felt very safe during our swim….get in touch if you have any questions about the swim.

1 Response to Crossing the Strait