Last week saw myself and some friends head to Slovenia to get in some more training.  Paul and I were there from team Flamingo’s and also some other swimming buddies who will be swimming a relay across Lake Zurich.  Slovenia was a fantastic place to train and saw us swimming across beautiful crystal clear lakes and emerald looking rivers.

Swimming to the Island on Lake Bled

On the Island on Lake Bled with Martin Strel

Day 1 saw us swim in Lake Bled.  We swam out to the little island in the middle and later on that day swam the length of the Lake which was amazing.  It has hosted World Championship rowing competitions in it which meant that we had a rowing line to follow the whole way across which was great! During the morning we were lucky enough to be swimming whilst some planes were practising above us for their air-acrobatic competition later on that afternoon. 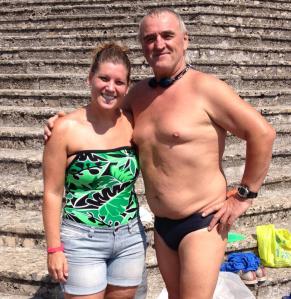 The other highlight of the day was meeting the legend that is Martin Strel aka Big River Man, if you are not aware of his achievements then you will be amazed to find out that he has swam rivers such as The Amazon, The Missisippi & Yangtse.  He truly is an inspiration when it comes to long distance swimming and a real honor for us to be able to meet and swim with him.

Day 2 Martin’s son, Borut, who was guiding our trip took us over to Italy where we swam across Lago del Prebil, a bit chillier than the warmer Bled but all good practise for us.  We then headed back into Slovenia for lunch and a nice cooling stop at a local waterfall – Kozjak which is in the Triglav national park and was very stunning – great to get out and do some walking in the beautiful area.  Lastly we swam down River Soca.  It was a gorgeous river and as we swam an old-fashioned steamboat ferry passed by – I am sure they were wondering what these crazy people were doing.  Instead of driving back to Lake Bohinj (or in fact swimming) we took the car train back which was a very unique experience and if you ever head to Slovenia a certain must as it is a great way to check out the views as you head back to the Julian Alps.

The group in Lago del Prebil in Italy

Us relaxing in Kozjak waterfalls

The car train back to Julian Alps


For our last day we walked 6km around Lake Bohinj which is where our hotel had been looking over for the last few days and then swam the length back.  It was a beautiful morning and such a great way to end the trip to Slovenia.  The team that looked after us were brilliant and after 3 days of swimming it was such a welcome change to train in such beautiful surroundings compared to that of the London lidos and Dover Harbour!  Thank you Strel Swimming for an amazing trip – I will be back! 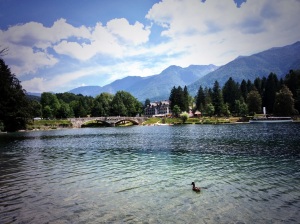 40 year old woman living in London generally found in water.
View all posts by lisaswims →
This entry was posted in General, Swimming. Bookmark the permalink.