But winter lingering chills the lap of May

So after time spent swimming in the safety and warmth of indoor pools it was time for us to meet our nemesis – Dover Harbour.  With sea temperatures at 8 degrees the Flamingos headed down to Dover to jump into the water and spend some time getting to know each other.

Team Flamingos turned up in all their Flamingo apparel including Flamingo flip-flops, towels and lots of very pink attire – we certainly stood out from the crowd.

We managed 2 swims in the sea on both Saturday and Sunday with time in between each trying to get warm before jumping into the sea again. It was bought home swimming up and down with the ferries in the backround that we really were going to be attempting the channel within a matter of months. 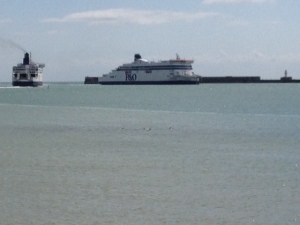 Swimming in Dover with P&O ferries in the distance

It was pretty cold and with little sun in the air and weathers more suited to November my ski jacket took on a new role – keeping me warm after each sea swim.

Team Flamingos warming up between swims

Saturday night saw us in the pool for two hours for a long session with a bit of competitiveness coming out at the end of the sessions when we raced the other Aspire relay teams.  A fun night and by 9.30pm we were sat in the restaurant munching down plenty of pasta replenishing the energy from the day and storing ready for our Sunday swims.

A fun albeit cold weekend but a great taster of what lies ahead – bring on the next training session in June where we will be attempting our 2 hour qualifying swim – this is a swim we have to complete before being allowed to attempt the channel relay.

40 year old woman living in London generally found in water.
View all posts by lisaswims →
This entry was posted in General, Swimming. Bookmark the permalink.