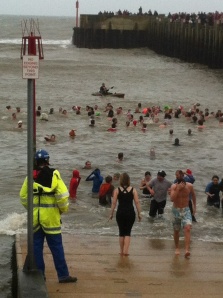 As part of my fundraising I decided to encourage people to donate money to my fundraising page for Aspire with the extra incentive that if I reached £1000 before Christmas (my target is £2000) then I would throw myself into the very cold waters of West Bay in Dorset during their annual Boxing Day Swim.Thanks to all those who donated and helped to get to the £1000 mark – although I must admit as I plunged into the 8 degrees water in West Bay on Boxing Day there were mutters as I cursed you all briefly.

It was really rather cold but it did make me chuckle as I looked up around with the other 120 crazy people about to throw ourselves into the ice water the amount of people who had come out to support – you would have thought it was the Olympics – no joke! So many people there to watch us jump in and squeal like Banshee’s… at least I have proof that I did it 🙂

Right now for the next £1000 on my fundraising quest

40 year old woman living in London generally found in water.
View all posts by lisaswims →
This entry was posted in Fundraising, Swimming. Bookmark the permalink.